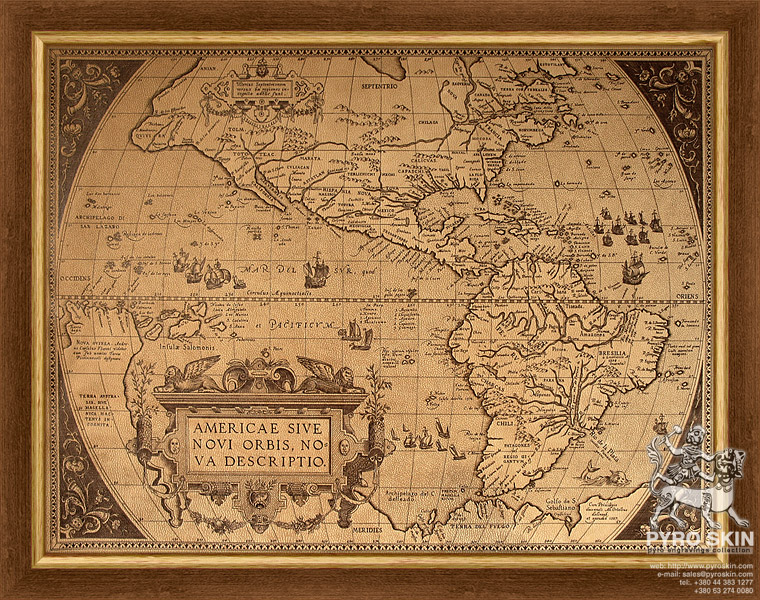 Price:
USD 1250,00
Shipping:  Standard international airmail®
Payments:
Returns:  Free 14 day returns | See details
In 1570, Abraham Ortelius, a rare book dealer and geographer from Antwerp, Belgium, created what is now regarded as the first modern atlas. In this monumental undertaking, which he titled Theatrum Orbis Terrarum (Theatre of the World), Ortelius bound together a unified collection of maps depicting the world as it was then known. The Theatrum was an instant success: despite the book's high cost, more than 7,300 copies were printed in 31 different editions between 1570 and 1612. One of the best-known and influential maps from the Theatrum is "Americae Sive Novi Orbis, Nova Descriptio" ("New Description of the Americas, or the New World"). The Archives of Ontario's version of this map originally came from the 1579 Latin edition of the atlas. Ortelius drew from the best available cartographic sources for his atlas, and was scrupulous in crediting them. The descriptive text on the reverse of the Archives of Ontario's "Americae Sive Novi Orbis" indicates that the voyages of Jacques Cartier were influential in the map's depiction of what is now known as Canada. "Americae Sive Novi Orbis, Nova Descriptio" is one of the oldest documents in the Archives of Ontario's holdings. The map was transferred to the Archives in 1959 from the Ontario Legislative Library.
Return to main catalog