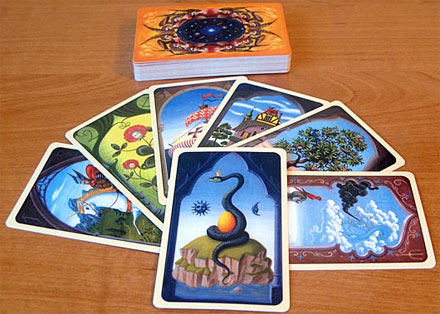 Price:
$ 24.00
Shipping:  International airmail®
Payments:
Returns:  Free 14 day returns | See details
Mystisches Lenormand Oracle is a 36-card deck designed in the 19th century. Marie Anne Adelaide Lenormand (or Le Normand) (1772-1843) was French cartomant and fortune teller famous as the Sybil of Paris during the 19th century and received many of Europe’s most influential and outstanding people, such as Napoleon and his wife Josephine. The images and symbols of the cards, painted by Urban Trosch, are much different than the two most common sets - Rider-Waite and Marseilles. It inherits some features from the Egyptian and Greek culture, and of course it reflects the Biblical influence. These stern, yet powerful, cards hold the key to our unconscious, thus they help in reviewing the past, warn against hasty steps in present and, moreover, they are able to show you the consequences in future. Relax and let your intuition together with imagination fly free framed just by the certain events that had already happened or are coming in the way. The cards are recommended to the experienced and advanced Tarot readers having some knowledge of the Tarot symbolism and magic. The deck can also be the prominent part of the collection for refined connoisseurs.
Return to main catalog