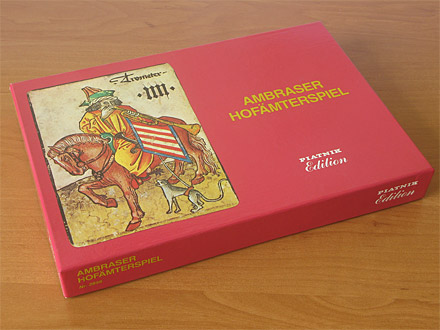 Price:
USD 130,00
Shipping:  International airmail®
Payments:
Returns:  Free 14 day returns | See details
The Ambraser Hofämterspiel ("Royal Household Servants") is one of a few late medieval Southern German (today's Austria) decks, all cards of which are extant. It belonged to the collection of art treasures gathered in the 16th century by archduke Ferdinand of Tirol. The cards featured masterly decorated and replete with tempera paint wood engraving. The suits reflect political relationships of that period, as they represent the four main countries in central Europe in the 15th century by four different shields : Germany, France, Bohemia and Hungary. The deck illustrates the social structure of royal courts during the late Middle Ages. They show members of a typical royal household – from the court jester up to the king's steward, including servants and court officials, with their names in archaic German in each suit. The cards in the Hofämterspiel deck are ranked by social hierarchy that reminds us the Mantegna Tarocchi, a set of 50 copper engraved cards from Italy, also representing a world order.
Return to main catalog