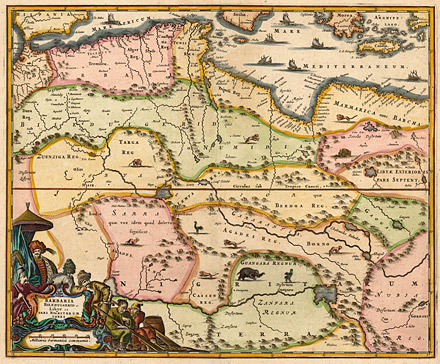 Barbaria, Biledulgerid o: Libye et pars Nigritarum terra. Olfert Dapper (1639-1689) was a Dutch physician and geographer who based many of his descriptions on interviews with sea captains and merchants returning to Amsterdam from foreign parts. His map of northern Africa is divided into four main horizontal sections labeled in large type: Barbaria, Biledulgrid/Numidia, Libya, and Nigritarum. Barbaria contains the more familiar coastal kingdoms (Alger, Tunis, and Tripoli), as well as the desert plateau region nearer to Egypt called Marmarica. Biledulgerid is the Arab name for a date-bearing region, and Numidia was the name of the ancient Roman province in North Africa. In Arabic, Libya, the third part, is called Sarra, which means desert, although a long river, the Girus, is shown flowing through it. Perhaps it is a variant of the Niger, from ghir nigheren, meaning “river of rivers.” Nigritarum translates as “land of the black people,” so called either because of the non-Arab inhabitants, who are supposedly of a black color, or because of the river Niger (black), which flows through the region between two lakes. The colorful cartouche area of the sheet shows brightly dressed men sporting long moustaches. But they appear more Asian than Arabic or African, for no European cartographer at this time had firsthand information about the physical features of natives in the interior.
Return to main catalog