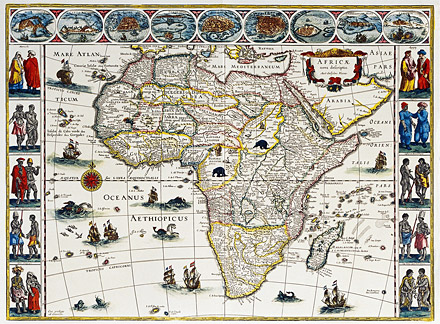 Africae nova description. This is one of the most decorative and popular of all early maps of Africa, from the “golden age” of Dutch mapmaking. First issued in 1630, the map was reprinted many times between 1631 and 1667, appearing in Latin, French, German, Dutch, and Spanish editions of Willem Janszoon Blaeu’s (1571-1638) atlases. The maps and atlases of the Blaeu family business, carried on after Willem’s death by sons Cornelis and Joan, marked the epitome of fine engraving and coloring, elaborate cartouches and pictorial detail, and fine calligraphy — the most magnificent work of its type ever produced. In the format called carte à figures, this appealing map contains oval views of, presumably, the major cities and trading ports of Africa at the time: Tangier and Ceuta (Morocco), Tunis (Tunisia), Alexandria and Cairo (Egypt), Mozambique (seaport of Mozambique), Elmina (Ghana, site of the largest and most spectacular castle in Africa built by the Portuguese), and Grand Canary (Canary Islands). Side panels depict costumed natives from areas visited along the coasts. The interior is decorated with exotic animals (lions, elephants, ostriches), which were (and still are) a major source of fascination for the public. The Nile (today’s White Nile) is shown flowing from the Ptolemaic lakes of Zaire and Zaflan. Flying fish and strange sea creatures cavort in the oceans, and the sailing ships all bear Dutch flags. Coastal names are engraved inward to give a clear, sharp outline to the continent. Probably the most interesting cartographic feature is the identification of specific large territories or kingdoms, which have been outlined in color, including a huge Abyssinia (Ethiopia) and Monomotapa (all of southern Africa). But these seem to reflect a European sense of nationhood — something presumed and projected upon a virtually unexplored canvas — more than the actual experience of traders and explorers, who would continue to report on hundreds of smaller ethnic enclaves and political fiefdoms during the next 250 years.
Return to main catalog