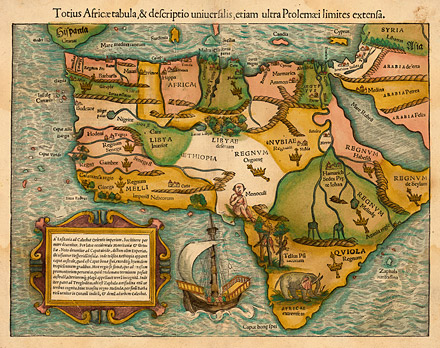 Totius Africae tabula, & descriptio universalis, etiam ultra Ptolemaei limites extensa. This is the earliest obtainable map of the whole continent of Africa. Because it was issued with some variations in both of Munster’s very popular works, Geographia (1540-1552) and Cosmographia (1544-1628), the map is difficult to date precisely. Sebastian Munster (1489-1552) was a professor of Hebrew at Heidelberg and then at Basel, where he settled in 1529 and later died of the plague. By soliciting descriptions and maps from German scholars and foreigners he was able over time to include up-to-date information in the various editions of his atlases, becoming the most influential cartographer of the mid-16th century. Munster was the first mapmaker to print separate maps of the four then known continents (Europe, Africa, Asia, America). The map of Africa contains many interesting — if not curious — features: a one-eyed giant seated over Nigeria and Cameroon, representing the mythical tribe of the “Monoculi”; a dense forest located in today’s Sahara Desert; and an elephant filling southern Africa. The Niger River begins and ends in lakes. The source of the Nile lies in two lakes fed by waters from the fabled Mountains of the Moon, graphically presented as small brown mounds. Several kingdoms are noted, including that of the legendary Prester John, as well as “Meroe”, the mythical tombs of the Nubian kings. Few coastal towns are noted, and there is no Madagascar yet. A simplified caravel, similar to those used by the Portuguese (and Columbus), sails off the southern coast. One of the intriguing aspects of this map is the loop of the Senegal River, which is shown entering the ocean in today’s Gulf of Guinea. Actually, this is the true route of the Niger River, but that fact will not be confirmed until the Lander brothers’ expedition in 1830. Strangely, this loop disappeared from subsequent maps of Africa for the next two hundred years. The text in the large cartouche offers a rudimentary itinerary for sailors from Lusitania to Calechut (Calicut, India), describing a route which essentially avoids Africa. Lusitania was a province of the Roman Empire, comprising most of modern Portugal and part of Spain.
Return to main catalog