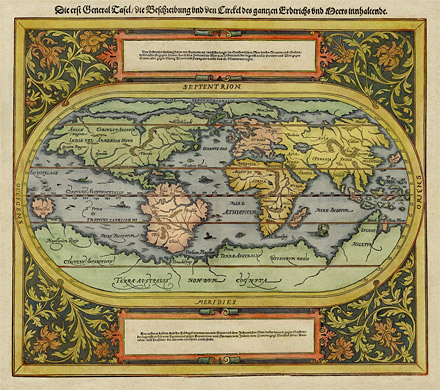 Decorative example of Munster's map of the modern World, based upon Abraham Ortelius' world map. This map first appeared in the revised edition of Munster's Cosmographia in 1588 and was part of a revised group of maps largely based upon Ortelius. The map includes a marvelous depiction of the Northwest and Northeast passages. The massive unknown southern continent (Terra Australis Nondum Cognita) is retained, as are early references drawn from Marco Polo's travels, including the location of Beach near modern day Australia. Japan is shown, as are the Kingdom's of Quivira and Anian on the West Coast of North America. Florida, Nova Francia Granada and Nova Hispania are other the regional names depicted in North America. Fascinating depiction of Southeast Asia, China and Korea. The map is elegant in its simplicity and stark depictions of the coasts, rivers and inland seas of the world.
Return to main catalog