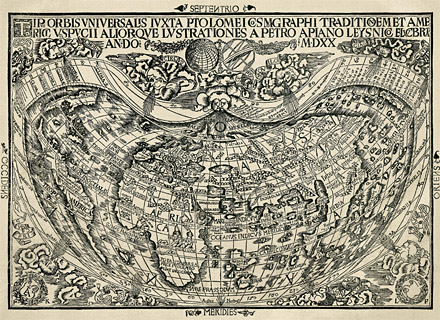 Peter Apian (also known as Peter Bennewitz, Peter Bienewitz, Petrus Apianus) was born in Leisnig, Saxony in 1495. He first studied mathematics, astronomy and the other branches of cosmography at Leipzig and then Vienna. Prior to Cosmographia (1524), Apianus published two cosmographical works, a compiled world map (Typus orbis universalis) and an accompanying geographical commentary. In 1527, Apianus was appointed Professor of Mathematics at the University of Ingolstadt. Perhaps his most celebrated work, the Astronomicon Caesareum, was presented to the Emperor Charles V in 1540. This sumptuous book provided a cosmographical introduction similar to that in the Cosmographia but in a more elaborate and elegant way. Apianus' relationship with Charles V dated to least the early 1530's when Apianus was granted an imperial privilege. However, it has been suggested the young emperor may have studied cosmography under Apianus even earlier still. Following the publication of the Astronomicon Caesareum, Apianus was appointed court mathematician to Charles V, and was knighted along with his three brothers. In the following years, the success of Apianus' books and his favor with the emperor brought him a substantial degree of wealth, prestige and power. In 1544, he was granted special legal privileges, including the authority to legitimize illegitimate children and to grant higher degrees. Throughout his life, Apianus was involved in mathematical publishing, cartography and instrument making. His instrument designs included a new type of surveying quadrant and armillary spheres. Apianus died in Ingolstadt at the age of 57 in 1552.
Return to main catalog